I always scoffed at people using trekking poles.  I hiked almost my entire life without the use of poles or walking sticks.  I didn't want the extra weight and I didn't need to look like a grandpa walking around the mountain.  It wasn't until around 2010 that I was passed by some AT through hikers much younger than me with poles did I reconsider my stance.

I did some research in the usage of them, considered my typical knee pains when traversing downhills and decided I wanted to give them a shot.  I didn't want to spend yet another 100+ dollars on something that I didn't even know if I would use so I waited until I found a sale online (my usual game) and I picked some up. 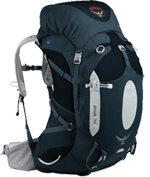