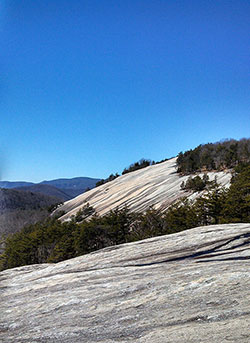 Stone Mountain is located in Roaring Gap, NC and well worth the trip if you're ever near the area.  My friend Jeff and his son were talking about getting into hiking and mentioned the area so I took them up on the offer for a Sunday trek into the woods.  The map indicated a strenuous hike however I think it depends on how you travel on the loop.  I let Jeff decide how he wanted to travel and I think it was a good decision.

From the parking area you immediately follow a trail that branches left and right.  Left leads up to the summit in a rather quick fashion with a load of stairs and probably where the strenuous portion comes into play.  We chose right and followed a beautiful clear stream.  We had a lot of rain recently but even so the water was crystal clear and the area is well known for trout fishing.  I can see why.  After about a half mile or so of a gently rolling trail, it opens to a vista of the mountain itself at the Hutchinson Homestead.  This place would definitely take you back in time.

I've always been enamored with the idea of living in the middle of nothing with trees, mountains, and a gurgling creek.  I grew up at the base of the mountain so I guess it is ingrained in my heart.  This would've been my dream home had I grown up in the 1800's.  It was a full farm that 4 generations of Hutchinson's lived in.  Who would give up the view, the land, and the waterfall nearby?  Certainly not me.  I thoroughly enjoyed this little piece of history; daydreaming of living in such a place. From the open field at the homestead you can get a nice view of the stone mountain.  We could see a handful of rock climbers making their way up a crevice that had been carved from collapsing chunks of the mountain.  We took the safer route that didn't require ropes.

We traveled on met up with the lower level of the falls.  The Stone Mountain falls are more of a slick granite bed with water sliding across it from 200ft or so above.  It's definitely a neat sight for sure.  Ascending a ton of stairs you can follow along the side of the falls all the way up to the top.  There are signs and fences everywhere trying to keep the adventurous away from the falls.  Apparently a lot of deaths have occurred both here and on top of the mountain.  After the climb to the top of the falls we took a little breather near the trail junction to the upper parking area.  We met up with a handful of Sunday travelers coming down to view the falls.

Up and away we went to reach the summit before stopping for a  little lunch.  This wasn't my usual hike of plowing through trails.  We were taking more of a leisurely approach but I soon lost Jeff and his son on the main ascent to the top.  There were lots of side trails off to the sides of the mountain where bare granite was exposed and nice views could be taken in.  I could see where people could easily drop off this mountain to their deaths as the gentle slope of rock turns quickly to a straight drop with no cushion.

We kept plodding along and decided to break for a lunch somewhere near the summit and I thoroughly enjoyed the views, ravens overhead, and a cool breeze as I munched on my goodies.  At this point we only had about another mile left on the trail and we were met with a lot of foot traffic coming up the trail.

Once we started to descend I was definitely thankful we came up the other side of the mountain.  I hate stairs on trails, especially downhill stairs.  I imagine that giants create these steps as they're wide apart and my brain can't seem to function with the uneven giant treads and mismatched risers.  I tend to walk with large strides and stairs disrupt my footing.  None the less we descended along the mountain face with a chain rail (great for keeping traction in the rain) but many people coming up were using it to jettison themselves upwards and using it more or less to climb.  I trudged along the giant steps plowing downhill.  Before I knew it we were back at the parking lot.

I have to say for 4.6 miles I barely felt it at all and with so many things to take in scenery-wise this was a well rounded little trail.  Depending on how you tackled it, I think it's great for a family trek.  I will definitely return some day after I knock out some other trails in the area that have my name on it.