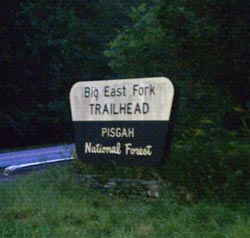 The bivy sack was constructed and bear bag tossed up for the night but I failed to dig out the trail mix bag from my waist belt pocket and a rodent subsequently found its way to it, carving a whole into my pocket. Exhausted, I ignored it, stared at the stars for a bit, and passed out. We had a long day ahead.

Saturday took us along the Art Loeb trail for most of the morning. We were camped at Shining Rock itself but apparently we missed the main attraction (the ledge area) and just kept hiking along. The Art Loeb trail junctions at Ivestor gap and was a little bit difficult to find (again no trail markings) and there are side trails and dead ends along the way but we lucked out and stayed on the right track. Most of the morning was a ridge hike up and over a handful of knobs with deep dredged trails and underbrush which took a toll on the ankles in the deep and narrow trail. I have to admit the views were grand to take in and it was a bit like a roller coaster for a while. I was thoroughly enjoying staying at the upper end of 5800 feet with very little tree obstruction. There were a few other hikers along the way but for the most part it was quiet and enjoyable.

Our next major approach was Black Balsam knob which is heavily traveled and rightly so since the views are breathtaking and worth the trip by itself. More roller coaster trails gave way to rock formations, ravens everywhere, and some outstanding panoramas. We found a nice area near the summit and sat down for a breezy but much needed lunch. Looking over we could see the nearby parking area was overflowing with people and the day hikers were passing us in greater numbers. We made our way past the crowds and began the descent down to Graveyard Fields. I was disheartened by the amount of trash and even human feces on the descent down. I know some people just don't care but it unnerves me to see blatant disregard for the trails. We had a lot of downhill from here and then a heafty push uphill to yet another rock formation. Down into Graveyard Fields we descended along an interesting trail with little foot bridges over springs every few yards. This area leaks water everywhere!

A bit further down into the Graveyard Fields area we came across a spectacular waterfall so we decided to hang out for a bit and relax. I'm like a little kid with water features. I am attracted to them so I will always look for waterfalls on hikes. The rushing cool water fascinates me for some reason. It made for a great area to refill on the water as well. Nothing beats some fresh cold mountain water in the pack. So I reloaded my 3L and watched some of the other people hanging around and playing vicariously around the water.

After that we set off for the final push to a camping spot. This was mostly downhill for the rest of the day. I was beginning to feel exhaustion setting in and we bypassed my original idea for a spot for the night. Around 6pm we snapped into the last trail junction (357 I think) and found an awesome spot to camp for the night next to the Pigeon river. I gulped down my meal and relaxed to the sounds of rushing water.

Our trip out was yet another interesting trail. This was composed of walking along the river in a rhododendron canopy for almost the entire trip out. The river was beautiful as were the trees. I was tired from the trip but the trail was flat albeit loaded with roots but no heavy up or down, and I was satisfied with a leisurely walk. We finished up by around 10am that morning and made our way home.

I will say this was probably one of the best hikes I have ever had. The diversity in what you will see along the way is well worthwhile. The peaks all the way down to the tree-tunnel trails and water features really made for an experience that I will never forget. I hope to do another section of this trail someday as I now know why Shining Rock Wilderness is so heavily traveled.